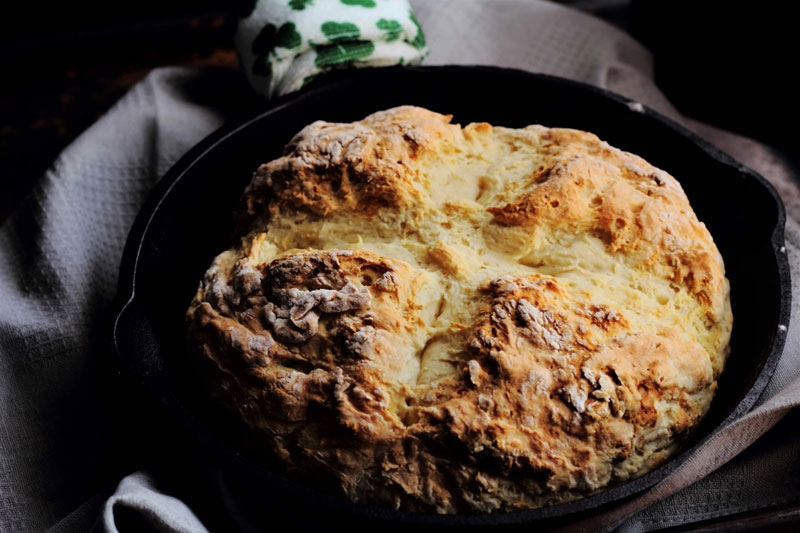 The most delicious, simple, and easiest bread you will ever bake in your kitchen. Traditional Irish Soda Bread is only 4 ingredients. Flour, Salt, Baking Soda, and Buttermilk. Quick bread at it’s finest. Paired with a compound butter, a preserve or drizzled with natural honey…this bread can’t be beat.

Some things are just so simple and absolutely delicious that they can not be beaten.  Enter traditional 4 ingredient Irish Soda Bread.  With St. Patrick’s Day quickly approaching, I thought it was time to get back to basics and share this simple quick bread that we make every year at this time.  Okay, so maybe we love it so much we don’t just have it on St. Patrick’s Day…..maybe.

This is true to tradition, and born out of necessity in the land of Ireland, where this bread was made and served daily.  Soda bread being sometimes the only item of nourishment on the table.

So, what is Irish soda bread?

Inquiring minds want to know! This is where science becomes the cool kid in the classroom and we get to talk about chemical reactions.  Since the leavening agent in this quick bread is not yeast, there is a whole other interesting explosion going on inside.

Basically, Irish soda bread is a leavened bread using the chemical reaction of sodium bicarbonate (baking soda) and pairing it with another acid (buttermilk). The reaction that occurs when these two playmates get together produces gas (carbon dioxide).  Carbon dioxide, when heated, causes an explosion of sorts and baked goods rise. Anyone having flashbacks of 5th-grade science volcanoes?  Ya, me too. Totally makes sense why we use this lovely ingredient when baking.  It makes things beautiful.  What is even cooler than that?  Baking soda, in itself, is used as an acid OR a base. That’s for another post but can we all agree that science is awesome? Yes!

Okay, cool. So, did the Irish invent soda bread?

Funny thing you should ask…..um, no.  Pot ash, pearl ash, and soda ash were names of baking soda in early culinary text. From what I can find through research, one of the earliest mentions of baking soda was in the form of soda ash, used by the American Indians.  I don’t suggest running out and experimenting with these forms as the bitter taste they produce is very off putting.

Soda bread has become synonymous with the Irish purely out of the need to feed their families.  Baking soda or bread soda as it was known in the early days was one of the least expensive ingredients.  Since the Irish used flour that was not as hard as wheat flour which is properly risen with yeast, baking soda worked beautifully for them.  That is why for this quick bread recipe we are using cake flour.  Cake flour, you could also use flour labeled pastry flour, is a soft flour and comparable to what the Irish would have used, traditionally.

To twist this tale of culinary legend, even more, there is mention of an Englishman who had a patent issued detailing this quick bread.  Head scratcher, right? Right…..

What about all the recipes I see for Soda Bread that have butter, eggs, raisins, etc.?

I say, they sound FANTASTIC! Will someone make me one?  I just brewed a fresh pot of coffee. In all seriousness, these are not soda bread rather they are soda cakes.  Soda cake is something that I remember hearing about as a child.  I never really understood what they were but I knew they were delicious!

SO! Enough of the history lesson…let’s get to the meat, er bread, of this post!

This bread somewhat reminds me of pound cake. I think because it is a pound of flour, 1 teaspoon of salt, 1 teaspoon of baking soda….see the 1:1:1?  Okay, maybe it’s just me.

One key component to making Irish Soda Bread is to make it quickly.  Heat your oven to 375 degrees before you add in the buttermilk.

You’ll want to start by weighing out one pound of flour into a metal sifter along with your baking soda and salt. Sift these together is a large bowl.

If you do not have a scale, 1 pound of cake flour is approximately 4.5 cups of flour. 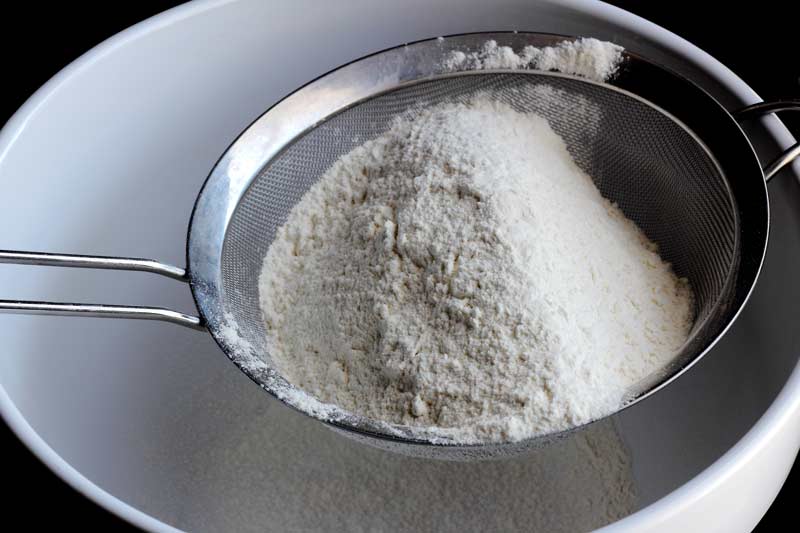 Next, and once your oven is heated to 375 degrees, add in your buttermilk. If by chance you do not have buttermilk you can always make your own. 1 cup of milk to 1 tablespoon of lemon juice, vinegar or apple cider vinegar will do the trick.  Wait about 15 minutes and you will have sour milk.  Sour milk is the traditional ingredient for Irish Soda Bread however since it is not as readily available today as it was in the 1800s, we use buttermilk. 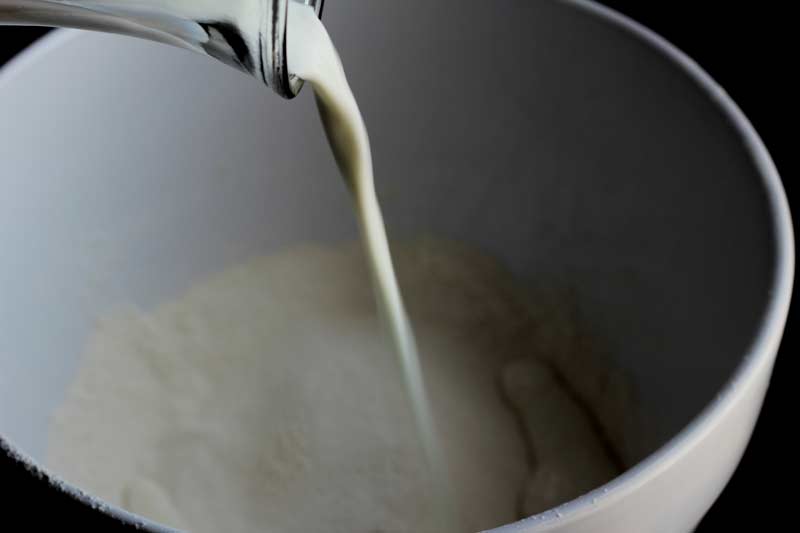 With a wooden spoon or your fingertips, gently pull the flour from the edges of the bowl to incorporate the liquid.  You’ll want to be sure not to overmix or add any more flour.  This is a very wet and very soft dough.

On a very liberally floured surface, turn the wet dough out onto a table.  You will only need to knead this bread about 8 turns being careful to knead softly as to not disturb the carbon dioxide forming in the dough.  Once you have kneaded the dough, form into a flat round. 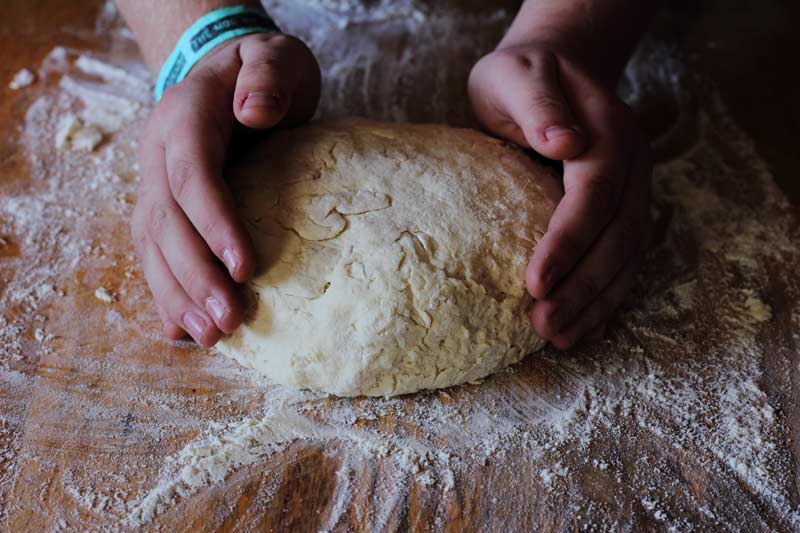 Traditionally Irish Soda Bread is cooked in a dutch oven or a pan that has a metal cover.  I did not do that.  I simply oiled my cast iron skillet with canola oil and lightly sprinkled flour on the bottom.  Place your round into your cooking vessel and cut a cross on the top of the dough.

Do you necessarily need a cast iron skillet? No, you don’t.  I also used a baking pan to cook alternative loaves of bread in which you will see further down in this post.  Any oven-safe vessel will work just fine.  Place into the oven and cook 35-45 minutes.

To check for doneness, you can insert a skewer or toothpick into the center of the dough. To double check, carefully lift the bread out of the skillet and tap the bottom.  If the bread sounds hollow you are golden. Pull that baby out and devour. Well, I mean, share with your family.

I decided to pair this bread with three different toppings.  For the traditional Irish Soda Bread, we used honey, blackberry preserves and I made a compound butter with Tarragon.  All three of these were absolutely delicious and brought out the lip-smacking flavor of the bread. 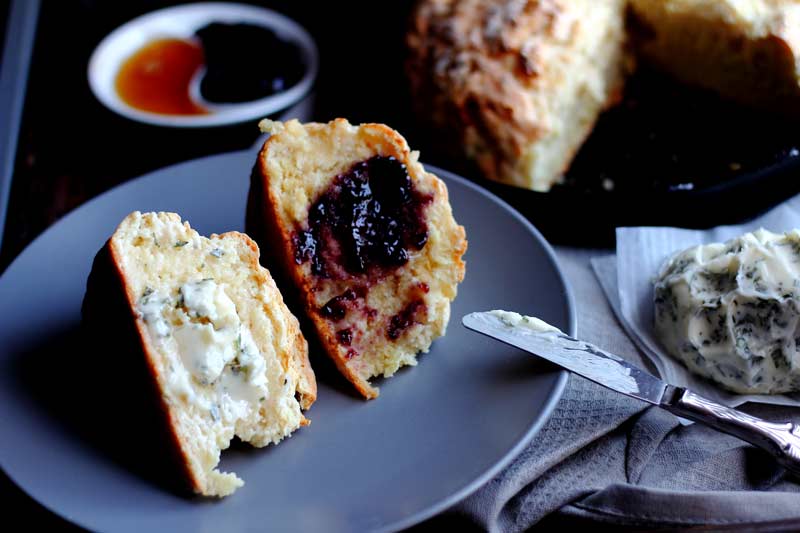 Mixing the honey and the preserves together on one piece was also divine! We all took the taste-test and there was only one piece left.  The husband polished it off for desert.

I thought it would be fun and hopefully helpful to you guys to play with this recipe and come up with a gluten free and dairy free version.  The gluten free version of this bread replaces the flour with a flour mixture of garbanzo bean flour, potato starch and tapioca flour in a 2:1:1 ratio.  You could also use a commercially made gluten free flour as well.  I know a lot of you who follow a gluten-free diet probably already have your flour mixture down so this will be an easy swap.

As for the dairy free portion, using the same ratio for sour milk, you can use 1 cup of soy, coconut, almond milk with one tablespoon of vinegar and get a similar result for buttermilk.  I personally used 2 tablespoons of Apple Cider Vinegar into a 1 cup liquid measuring cup, 2 tablespoons of canola oil and filled the cup up to the 1 cup mark.  So, I had my acid, fat, and moisture.  To that, I added an additional 3/4 cup of water to make up the balance of moisture needed. I did this to see if I could make this gluten, flour, nut, and soy free.  Let me tell you what, I absolutely loved it! It was a bit dry however after drizzling honey on top it was sooooo good. SO GOOD!

Like with other gluten-free crusts I’ve made, this bread is a bit crunchy on top but still very soft in the center.  I love the cracked pattern on the outside of the bread. 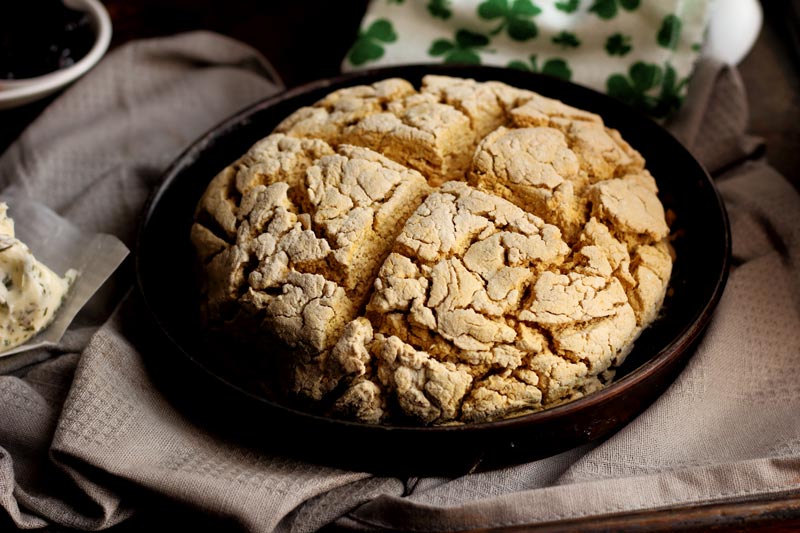 So after what I considered a success I moved onto beer and cheese.  NOT traditional at all but hey, I was having fun and wanted to experiment.

The only thing I did different for this version, well two things, was added 7 ounces of Guinness to replace half of the 14 ounces of buttermilk.  So, basically, I split the buttermilk component. I added in one loosely packed cup of sharp cheddar cheese to the batter and an additional 1/4 cup was placed on top.  This version was delicious with the compound butter. 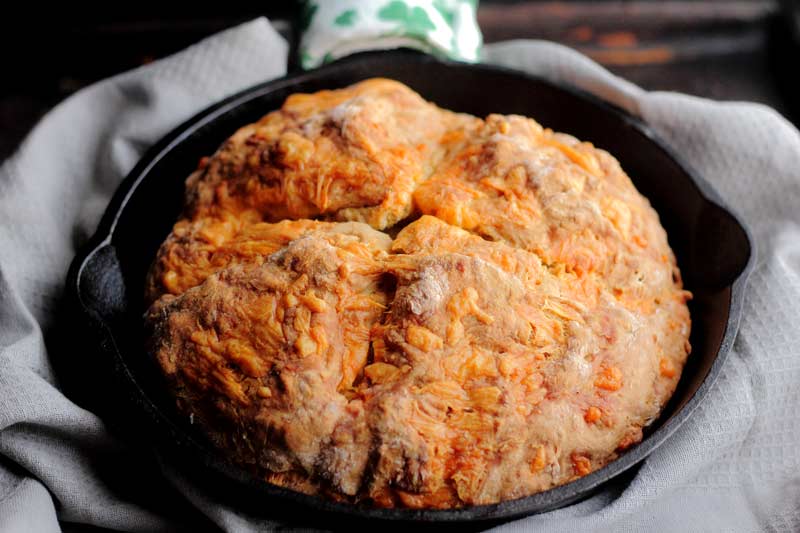 There you have it you guys!  Irish Soda Bread, that really wasn’t invented by the Irish, four ways!

I honestly could have played with this bread for days but, I wanted to get this out to you in time to celebrate on St. Patrick’s Day.

Bonus question! Do you know why it is tradition to cut a cross on top of the soda bread before baking?  Take a guess and let me know in the comments!

What are we waiting for? Let’s get cooking!

May the road rise to meet you….. 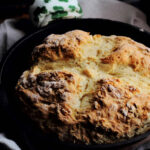 0 from 34 Reviews
0
Print
Bookmark
Previous Next

This site uses Akismet to reduce spam. Learn how your comment data is processed.

Hi I"m Sally and thanks for stopping by! Come on in and hang out for a bit. A little about me: Lover of food, snapper of photos, Wife of the hubs and Momma of two beautiful babies! I am passionate about helping people gain confidence in their kitchen; helping them through the most complex dish to simple snacks and quick fixes. I love what I do and hope to inspire you to cook more and cook often!

Sometimes.... you do what ya gotta do. I’ve been

I hope everyone is staying safe, healthy and 6feet

Four ingredients and 15 minutes 💥 is all you ne

Hey there! Got 30 minutes? That’s all it takes f

I had the amazing fortune of receiving these beaut

When life hands you perfection. Fueled by coffee a

You're never too old to carve a pumpkin 🎃 happy

#prayforlasvegas my heart is broken this morning..

There's nothing like a tray of baked chili relleno

Butterflies 🦋 for days, yo! There's many more b