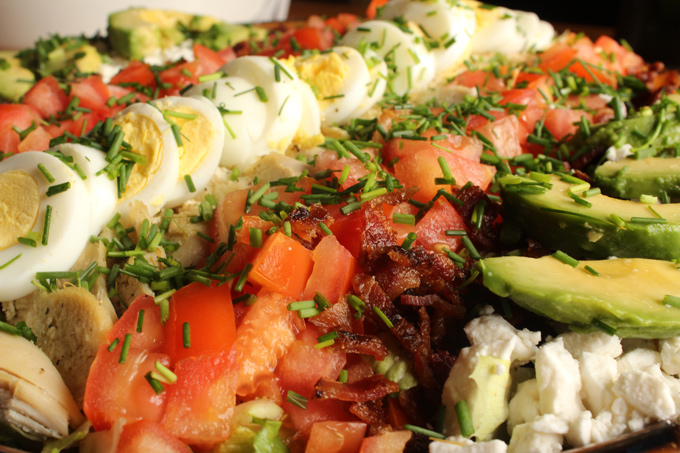 Hello, everyone!  Sharing today a recipe for Cobb Salad originally posted for Lexi over at Lexibites.  Lexi is amazing, be sure to check her out!

Today I’m going to share with you a true American classic that hails from my home state. The Cobb Salad! Originating at The Brown Derby in Hollywood, California.  There are two stories that surround the origin of this dish however the most popular version goes like this:

One night in 1937, the owner of The Brown Derby, Bob Cobb, was very hungry. Rummaging through the kitchen, Bob opened the large refrigerator and began to grab random items to put together for his snack. Lettuce, romaine, watercress, chicory,  boiled chicken breast, cheese, eggs, avocado and some crisp bacon that he nabbed from a busy chef.  He began chopping and mixing things together, topped it off with old fashion french dressing and voila! The Cobb Salad was born.

The salad became an overnight hit with Derby customers and was added to the menu. To this day, The Cobb Salad is still served. The other story involves the chef of The Brown Derby inventing the salad and Bob Cobb making up the story for marketing purposes.  Either way, this Cobb Salad is the perfect blend of everything you would want in a salad let alone a meal. Tangy, crispy, salty, hints of bitter and downright delicious. The dressing changed to a vinaigrette from the original french dressing, as it was slowly going out of style.

A few notes about some of the ingredients.

Chicory: In 1937 Belgian Endive was referred to as Chicory.  If you were to walk into Whole Foods and ask the produce man where their Chicory is, as I did about 7 years ago, they might tell you they didn’t know what that was.  Food history shows us that it is, in fact, Belgian Endive.  Sounds a little more appetizing, right? Right.  Belgian Endive is sold at most mega-marts across the United States and should be easy to find.

Roquefort Cheese:  The original cheese of the Cobb Salad.  Roquefort is a member of the blue cheese family syndicate but, it is not replaced by generically named “Blue Cheese”. Most cheese that bares the label “blue cheese” is injected with the mold penicillin to produce the blue veins. Roquefort hails from the South of France and is made in a similar way however the penicillin is cultivated from loaves of leavened bread in the caves where the cheese is produced. Roquefort is also made from sheep’s milk and not only sheep but two specific types of sheep.  Knowing this,  if you have difficulty locating Roquefort cheese your next best option that is comparative in taste is Gorgonzola or Stilton, in my humble opinion.

Salad Oil:  The dressing calls for ¾ of a cup of salad oil.  I don’t know about you, but I’ve never seen anything labeled as such in the grocery store.  A little food history and it is said that when a recipe calls for salad oil, “any edible vegetable oil that is normally used in salads” was the one the cook looked for. Due to the addition of ¼ cup of Olive Oil, I would guess that the majority of the dressing was either sunflower or peanut oil.  This part of the dressing really comes down to the preference of your palate. I personally will use ¾ cups of extra virgin olive oil and ¼ cup of pure olive oil.

I make a rather large platter of Cobb Salad for a weeknight meal which ends up leaving me with plenty left over to lunch on throughout the week.  The large platter approach is great for parties, potlucks and serving a family meal.  For a more elegant approach to the Cobb Salad, you can build on personal plates and serve as a main course. Either way, this salad is always a hit!

Should you choose to prepare the Cobb Salad as individual plates, the tomato is traditionally prepared peeled and placed at the center of the plate, atop the salad.  To peel the tomato, core out the stem and mark with an X across the stem end with a sharp knife. Drop the tomato into boiling water for 5 seconds then immediately into an ice bath to halt the cooking process.  This will allow you to remove the peel with ease. You can also do this on a platter Cobb Salad as well, however, the seeds tend to become a bit messy. If preparing a platter I will generally just dice the tomatoes to keep them intact.

I hope this has inspired you to create a true American classic for your friends and family. Next time you’re in a restaurant and see the Cobb Salad on the menu, may you share the story and incite festive dinner conversation!

Tip: Want to get a head start on this salad?  You can prepare the chicken, bacon, and eggs a day ahead of time and assemble everything the day of your party or meal!

Original recipe from The Brown Derby Cookbook which can be found here.

So, what are we waiting for? Let’s get cooking!

0 from 2 Reviews
0
Print
Bookmark
Previous Next

This site uses Akismet to reduce spam. Learn how your comment data is processed.

Hi I"m Sally and thanks for stopping by! Come on in and hang out for a bit. A little about me: Lover of food, snapper of photos, Wife of the hubs and Momma of two beautiful babies! I am passionate about helping people gain confidence in their kitchen; helping them through the most complex dish to simple snacks and quick fixes. I love what I do and hope to inspire you to cook more and cook often!

Sometimes.... you do what ya gotta do. I’ve been

I hope everyone is staying safe, healthy and 6feet

Four ingredients and 15 minutes 💥 is all you ne

Hey there! Got 30 minutes? That’s all it takes f

I had the amazing fortune of receiving these beaut

When life hands you perfection. Fueled by coffee a